I wasn't sure what to have for dinner earlier. I had some chicken to cook, some left-over Sharwood's tikka masala sauce and some mushrooms. I decided to experiment and try making those ingredients into a burger. A chicken & mushroom tikka masala burger. It was yummy. 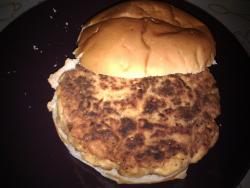 I think I'll look at my decompiler paper tomorrow. I haven't really looked at it for almost a year. I need to fix it up, turn it into a journal paper and also an MPhil transfer report chapter.