I recently completed the artist automaton model by cardboard model company cool4cats. This model is extremely clever in it's design - turn the handle and the artist actually draws. He doesn't draw exactly what he sees; he obviously has a dirty mind. The model kit is comprised of 20 A3 sheets of printed card. Each part is numbered, and marked with cut & fold lines and the model comes with a detailed step-by-step instruction booklet. The model is expensive at £43 + £9 postage but this is due to the amount of card and the amount of work that went into designing the model (I didn't actually buy it myself - it was a 25th birthday presents from my awesome girlfriend).

Have a look at the video below of the finished model:

And here's the finished drawing: 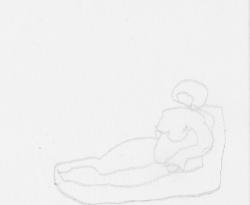 So how does it work? The handle turns a worm gear which, in turn, turns two cams. The worm gear dramatically slows down the movement - it takes 48 turns of the handle to turn the cams fully. The smaller cam controls the head up/down movement - the cam follower is connected via a cotton thread to the head; as the cam pulls the follower backward the cotton tightens and the head straightens up. The larger cam controls the movement of the artist's arm and sideways movement of the head - the movement is transmitted to the artist's hand & head by a series of levers, which turn the cam movements into a drawing. Rubber bands pull the cam followers against the cams. Watch the video below of the inside of the artist to see how the shape of the cam affects the movement of the hand & head (the smaller, head movement cam isn't visible in the video - it's under the large cam).

The design of the model is very good and the instructions are detailed; it must've taken ages to design the model! There are many little details such as the tiny tubes of paint, and paintbrushes. There are a couple of errors - the right arm is hairy, while the left arm has no hair, and the tab at the back of the artist doesn't match the spot on the floor. The drawing isn't exactly the same as it should be; I think I've done something wrong as the arm moves too close to the body when drawing the edge of the chair. However, it is very close and does look like a woman. Some parts of the model were fiddly to glue and I made some mistakes because I didn't read the instructions properly before glueing. For example, I had to cut open the chair and re-glue because I hadn't read that I should glue later. I also didn't cut out the artist's ears - because it didn't mention this in the instructions and I only noticed after looking at a completed picture. The large cam was difficult to cut out as it is important to follow the cut lines exactly because it will affect the drawing. The model is huge and I'm not sure where I will put it yet!

Here's some more pictures that I took during the building of the model: 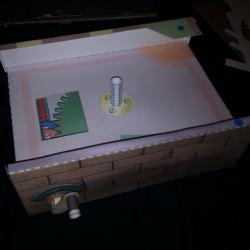 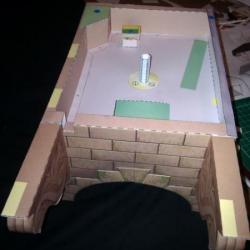 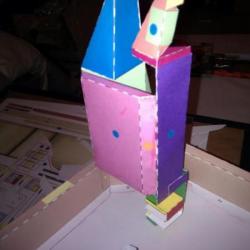 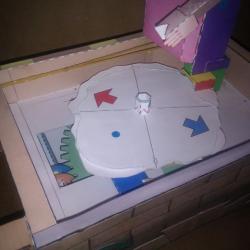 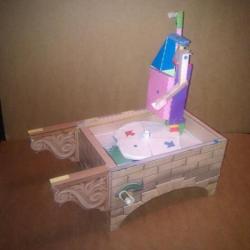 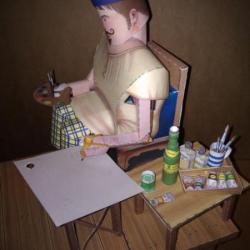 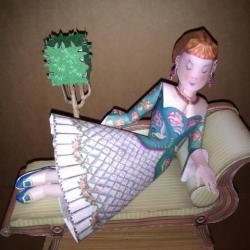