A Survey of Software Watermarking by Register Allocation (for Java Bytecode)

In this paper, we examine register allocation based software watermarking algorithms; these algorithms are constraint-based static software watermarking techniques. Figure 1 shows the evolution of this family of algorithms on which we report previous findings, describe some recent additions (including a correction to a published algorithm) and conclude by suggesting a direction for future work. 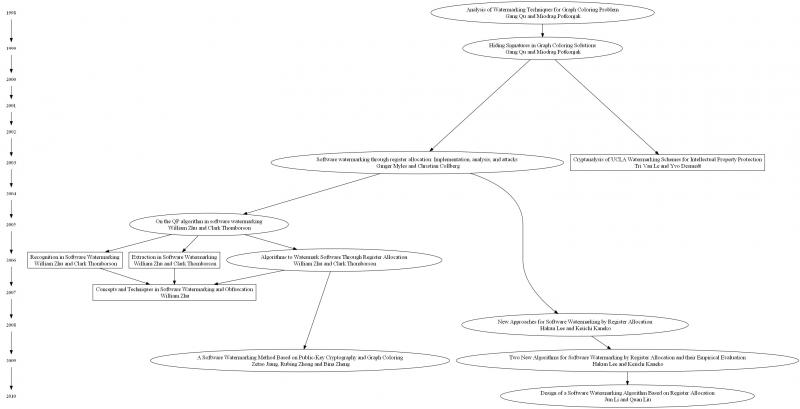 The QP algorithm 1 is a constraint-based watermarking algorithm based on the concept of graph colouring. In the QP algorithm edges are added to the graph based on the value of the watermark. When edges are added to an interference graph the vertices that become connected must be re-coloured - and they cannot be assigned the same registers. In other words, we add a new constraint to the problem (the extra edges) and when we compute the graph colouring we have a solution which solves the graph colour problem and one which also includes the watermark.

The first step in the QP algorithm is to convert the message into binary, for example convert a string into binary by using ASCII codes. The next step is to add additional edges to the interference graph, in such a way that the extra edges encode the watermark. The QP algorithm requires that the vertices of the graph are indexed and relies on the ordering of such indices for embedding and extraction. The originally published QP algorithm contained a minor problem which assumed that every vertex in an arbitrary graph could contain one bit of information; Zhu et al. proposed a clarified version of the algorithm 2.

Myles et al.3 implemented the QP algorithm using register allocation; they found that a stricter embedding criteria are required due to the unpredictability of the colouring of vertices and the fact that one vertex can be used multiple times. Another, major, flaw in the QP algorithm is that it is possible to insert two different messages into an interference graph and obtained the same watermark graph 2. The QP algorithm, therefore, is not extractable4 5.

Due to these flaws in the QP algorithm, Myles et al.3 proposed an improvement which they call the QPS algorithm.

The key difference between the QP and the QPS algorithms is the selection of vertices. In the QPS algorithm triples of vertices are selected such that they are isolated units that will not effect other vertices in the graph. As watermark bits can only be inserted where there are coloured triples the data-rate of this algorithm is far lower than the QP algorithm.

Zhu et al.4 provide clarified versions of the QPS algorithms which eliminate some ambiguities in the originals.

Myles et al. implemented the QPS algorithm in Sandmark6, an open-source tool for the study of software protection algorithms. They performed a variety of empirical tests to evaluate their algorithm's overall effectiveness, examining five properties: credibility, data-rate, stealthiness, part protection and resilience. The results showed that the QPS algorithm has a very low data-rate and is susceptible to a variety of simple attacks, such as obfuscations. However, they also conclude that the QPS algorithm is quite stealthy and is extremely credible. In other words, the watermarks are hard to detect by an attacker whilst readily detectable by the watermark author.

Lee and Kaneko 8 experimentally evaluated their CC algorithm and found that, on average, it takes 0.75 extra colours to embed a message in an interefence graph. They suggest using the CC algorithm for programs which contain many variables, as the data-rate is equal to the number of vertices in the interference graph. They introduce a second algorithm - Color Permutation - for use in programs which require a large number of registers.

The Colour Permutation (CP) algorithm 7 uses a similar idea to the CC algorithm, as they both change the colouring function for an intereference graph to encode the watermark bits. The CP algorithm converts the watermark bit string into a natural number $M$, and then chooses the Mth permutation of the lexicographically ordered colours to replace the original colour. The algorithm uses the relationship between the factorial number system and lexicographically ordered permutations to obtain the Mth permutation.

Lee and Kaneko8 experimentally evaluated their CP algorithm and found that the embedded watermark is stealthy and has a high credibility but low-resilience to semantics-preserving attacks. The CP algorithm has the advantage that it will never introduce a new register; however, this means that the program must already use a large amount of registers in order to embed a large message. The CC and CP algorithms cannot embed a watermark consisting of all zeros.

Qu et al.10 proposed a modification to the QP algorithm for fingerprinting. Fingerprinting is a class of watermarking which embeds a unique identifier into each copy of the software (or music, or films, etc) which allows the origin of the stolen intellectual property to be identified.

The generic approach proposed is to generate n solutions to a graph colouring problem and assign a given solution to one customer only. This approach guarantees that each customer will be able to be uniquely identified by the register allocation generated by their unique inteference graph colouring.

It is advisable to encrypt the watermark message before embedding to prevent an adversery from extracting a watermark, even if they know the extraction algorithm. For example, if an adversery obtains a program which they know contains a watermark embedding with the QPS algorithm they can simply run the QPS extraction algorithm and obtain the watermark; they could then claim that they inserted the watermark. Jian et al.11 propose a technique based on a combination of RSA public-key encryption and the QPI algorithm4. Simply, they suggest that the watermark bit string is encrypted before being embedded. If an adversery extracts the encrypted watermark they will not be able to decipher it, if the encryption is strong enough.

We believe that further research should instead focus on dynamic software watermarking techniques which, in theory, should be resilient to semantics-preserving transformations; thus providing a robust technique for the protection of software.

Read the full paper by downloading the PDF.